We Have It Totally Under Control

I'm Not a Believer in Man-made Climate Change

When it Gets a Little Warmer, It Totally Goes Away

The Persistence of Folly

2020. If only this year could be erased from history as easily as unsolicited spam can be deleted from an email account.

For over 50 years, and as many one-person exhibitions, my quest as an artist has been a personal plea for sanity, an end to war and the elimination of the threat to humanity of nuclear weaponry. I believe that the works of artists, of all media, can—and has—made a difference in the trajectory of human history. This group of artworks is my latest contribution, however small, to that collective effort.

I turn 72 years of age at the end of this month. One week later, our nation goes to the polls to elect the next president, and determine the future of our democracy and the fate of human civilization. Nothing less than the survival of our children and grandchildren is at stake. My art expresses my passions and my views.

I hope this work has an impact on you. I hope it inspires you to vote.

A studio artist who lives in Vaughn, Washington, Richard Notkin’s teapots and ceramic sculptures have been exhibited internationally and are in more than 75 public collections, including the Metropolitan Museum of Art in New York, the Smithsonian Institution in Washington, DC, the Los Angeles County Museum of Art, the Victoria and Albert Museum in London, and the Shigaraki Ceramic Cultural Park, Japan. Among his awards are three artist fellowships from the National Endowment for the Arts, and grants from the John Simon Guggenheim Memorial Foundation and the Louis Comfort Tiffany Foundation. In 2008, Notkin was elected a Fellow of the American Craft Council, and awarded a Hoi Fellowship by the United States Artists Foundation. He is also the recipient of the Meloy Stevenson Award from the Archie Bray Foundation, Helena, MT, and the Honorary Membership Award from NCECA, National Council on Education for the Ceramic Arts. 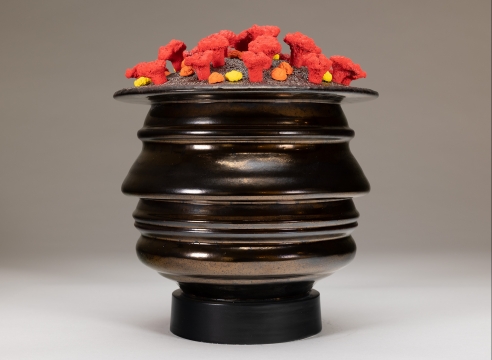