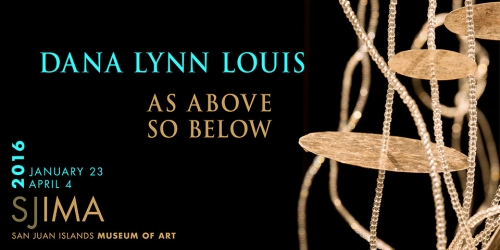 As Above, So Below includes four components: a floor-to-ceiling drawing on the glass of SJIMA’s Atrium Space; suspended glass and mixed-media sculptures; etched mirrors installed on the floor; and video projections. Experiential and multidisciplinary, the installation engages time and light, the changing shadows and reflections constructing a conversation with the materials of the Atrium Space and the environment of the region.

Watch the artist create the site specific installation in the SJIMA Atrium Space January 2 to January 15, 2016. The exhibition formally opens on January 23, 2016.

For two decades Louis has maintained a rigorous studio practice that engages architectural space, glass, light and shadow among numerous other  components. The results fluctuate between intimate, domestic-scaled pieces, to interdisciplinary performance collaborations, and large-scale public works that energize and alter one’s experience of their environment. Louis is conceptually inspired by the timeless and fascinating systems of the body, the natural and constructed worlds, and their interconnectedness. Louis’s recent installations are based in the act of drawing. Both two and three-dimensional components engage notions of breathing: the ability to foster the breath that it takes to physically move through life, both conceptually and spiritually.

Like much of her work in the past several years, As Above, So Below raises social and political concerns. For over a decade, Louis worked in West Africa helping to create the Ko-falen Cultural Center in Bamako, Mali. Her recent work is deeply informed by her loss of place in Mali due to the Mali Civil War, which began in 2012, and has been further complicated by the presence and activities of multiple insurgent groups in the region ever since. Louis states that her installation at SJIMA will “seek to stimulate levity amongst our currently difficult human international landscape. My intention is to inspire hope and thus encourage action towards the betterment of our ability to live humanely together.”

Louis’ work is internationally exhibited and collected. Articles about her work have appeared in Sculpture Magazine, Artweek and the German periodical Glashaus, among other periodicals. Available documents include a book published by Lewis and Clark College in conjunction with her 2014 exhibition Clearing, and a catalog from her 2009 exhibition, Faith Suspended, published by Marylhurst University. In addition to awards from the Regional Arts and Culture Council, The Ford Family Foundation, and The Oregon Arts Commission, Louis is a recipient of the Pollock Krasner Foundation grant.