Seattle artist Stephen McClelland creates vivid abstract paintings in oil stick that combine the organic form of intuitive and automatic drawing with formal issues of composition. Stylistically influenced by 20th century abstraction and surrealism, including such artists as Jean Miro or Andre Masson, his process reveals subconscious imagery and ideas beyond the physical and metaphysical realms. McClelland is also influenced by sgraffito, the European form of architectural decoration that inscribes into plaster. This technique inspires McClelland’s desire to create a “drawn painting,” applying line in a maze-like whimsical way. Compositionally, the artist combines formality with spontaneity contrasting black and white line with brilliant color. The result is a lively and compelling interchange of spatial play and depth within a psychic arena.

Born in Texas, Stephen McClelland studied at Cranbrook Academy of Art in Michigan before receiving a MFA in 1975 from the University of Washington. Since that time he has exhibited throughout the Northwest. His work has been included in exhibitions at the Seattle Art Museum, the Tacoma Art Museum, the Port Angeles Fine Art Center, Seattle Pacific University and the Western Washington University in Bellingham. He has been a guest instructor at Portland State University, Cornish Institute of Art, and University of Washington. 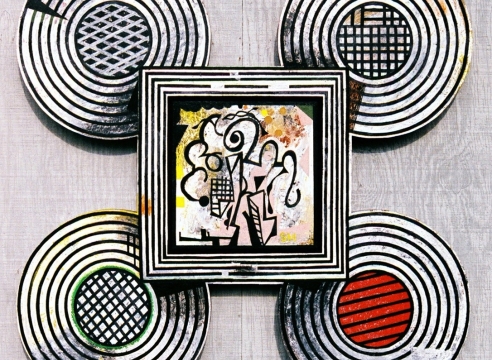