This commemorative exhibition celebrates one of the Northwest's most well known artists, Louis Bunce.  Born in Wyoming in 1907, Bunce moved with his family to Oregon when he was a teenager. He studied at the Arts Student League, NY during the 1920s where he befriended artists such as Jackson Pollock and David Smith. After returning to Oregon, Bunce taught at the Museum Art School (now PNCA) from 1946-1972, embracing the contemporary art movements of the time, and influencing many young artists.  He began exhibiting in 1937 on both the east and west coasts and was honored in 1979 with a retrospective at the Portland Art Museum. As a lifelong pursuit, he engaged with the dynamic and evolving artistic styles of the times. In the 1950s, he completed a major mural for the Portland International Airport, which still hangs today. His work is included in the collections of New York’s Metropolitan Museum of Art, the National Gallery of Art, Washington, D.C., San Francisco Art Institute, Seattle Art Museum and the Portland Art Museum. His vitality for both life and painting continued throughout his career until his death in 1983. This exhibition commemorates what would have been Louis Bunce’s 100th birthday on August 13. 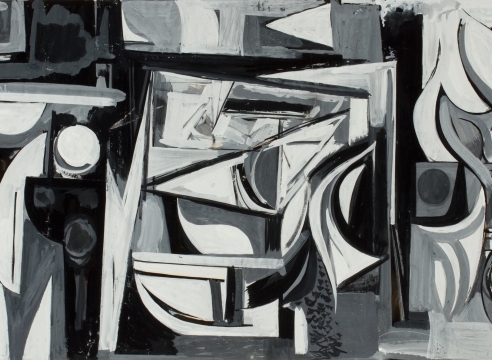